Awestruck, I’m craning my neck back to see the top of this 159 meter waterfall majestically cascading over the cliff, sending misty streams of water tumbling down the rocks. The mist then scurries across the surface of the fiord and flies up to the boat to plant the tiniest cold wet kisses on my face. Throw in some unicorns and fairies and this place is a freaking magical wonderland. The Milford Sound is officially underrated, and I surprise myself in making this claim, due to all the hype that surrounds this natural wonder in Fiordland National Park on the South Island of New Zealand. However, no amount of words can do justice to the unique beauty this place possesses.

I signed myself up for an ambitious day tour out of Queenstown, which begins with a quick 5 and a half hour coach bus ride through the mountains, Te Anau, and finally Fiordland National Park. The name Milford Sound is deceiving, because it is actually not a sound. Rather, it is a fiord. The difference between the two (and I know this because now I consider myself quite the nature expert) is that a fiord is the product of glacial formations and movements, whereas a sound is not. I know, I’m a genius. Anyway, true to the informalities of the Kiwi way, Milford Fiord just doesn’t roll off the tongue with as much ease as its official name, thus the name Milford Sound was adopted. As luck would have it, the day was beautiful, which is a rarity for New Zealand’s wettest location with an annual average rainfall measuring between 7-9 meters.

In between naps and those awkward moments of head jerks and drool clean-ups, we stopped at a few locations so we could all capture these precious moments on camera, the first of which being Mirror Lake. Gazing at the mountains in the distance and in the reflection of the lake, I found myself a new friend who seemed to be in quite a rush to claim the spot next to me. Talk about subtlety. 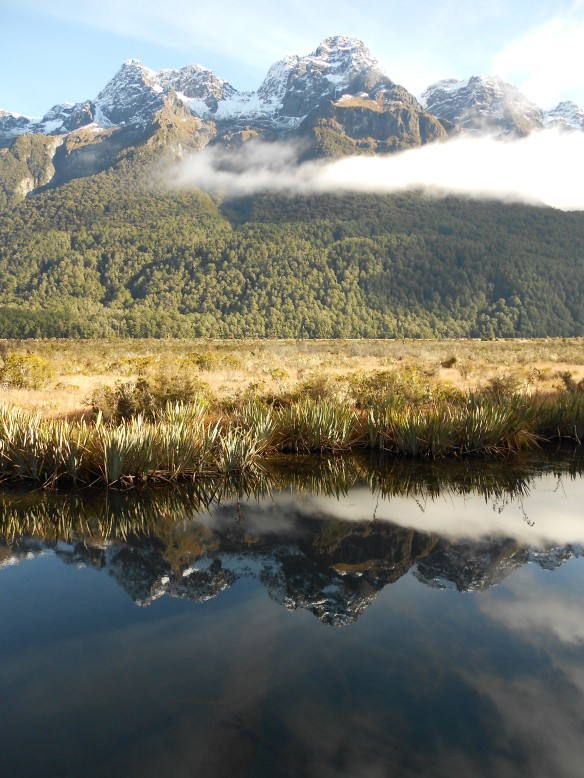 After Mirror Lake, we were on our way again through the park. Other stops included one to see the cheeky Kea, the only alpine parrot in the world. These birds are unique to New Zealand and have earned themselves an impressionable reputation at the tourist’s enemy. They are extremely inquisitive and intelligent, thus they have been known to chew car parts and steal food. One guy even lost his passport to one of these birds.

Our next stop was at a burbling little stream. The bus driver kindly demanded we empty our water bottles of “whatever rubbish is in there and refill it with some real water.” I thought he was joking at first and forced myself to laugh along at this poor guy’s attempt at some humor, until I realized I was the only one laughing. I shut up and grabbed my water bottle. Let me just tell you, that was the best damn water that my lips have ever been privileged to taste. I think they spike it with something.

Finally, we get to the dock to board the boat for our 90 minute cruise. (Yes, I am telling you that a 5 and a half hour bus ride each way was totally worth it for a measly cruise lasting less than a couple of hours.) As we set sail, I got to watch nature put on a show for us. Literally. Cruising along the water, each level of mountains is drawn back like a curtain to reveal more. There were waterfalls, cliffs, snow-capped peaks in the distance, beech trees blanketed over the mountains, and then we made it out to the end of the fiord to see the Tasman Sea lurking in the distance. This was like everything else I have already seen in New Zealand combined. And on steroids. Super-sized.

The Milford Sound is 276 meters deep at its deepest point, with about 10 meters on top being fresh water. Unlike the rest of the water in this beautiful country, the water here is a gross murky brown. This is because of all the rainfall, which washed down the forest floor nutrients and pouring them into the fiord.

On the way back to port, I was cold and tired and pissed off because I was the idiot who didn’t charge my camera before embarking on such a photographic journey. My spirits were promptly uplifted as the dolphins took this as a cue and swam toward us. Just as I thought this place couldn’t get any more special, these beasts (and I say beasts because seriously these things were huge; I’m telling you, it’s the steroids) came up to our boat in nature’s grand finale show. Right when they swam away to do whatever dolphins do (did you know they have sex like 40 times a day?) the hugest waterfall I have ever seen revealed itself. We hovered here for a while and then headed back. 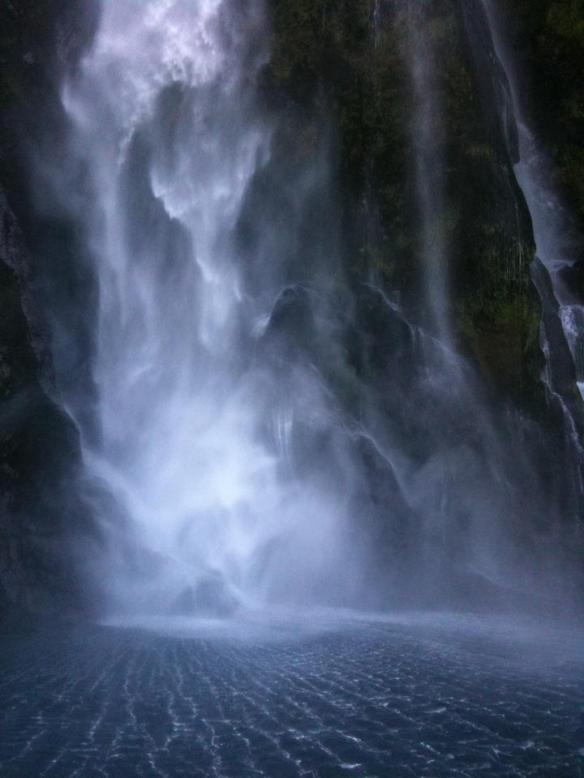 The bus ride back to Queenstown was actually more bearable than I had anticipated. The driver treated us to the movie “The World’s Fastest Indian,” the tale of Invercargill’s only claim to global fame and significance. This guy sailed to America with his motorcycle in his successful attempt at clinching the honor of the land-speed world record holder. I swear, New Zealanders all know exactly where they stand in the world, as insignificant as their feats may seem to the rest of us; you just can’t touch Kiwi pride.

2 thoughts on “it’s really a fiord”