I’m looking up at the sky and can’t even see my final destination, it is that high up and covered in clouds. Dragging my suddenly heavier than life legs up to climb the next set of rocks, I can envision how it must have felt to be in Frodo and Sam’s shoes (or hairy feet) and climbing up to the top of Mt Doom to destroy the ring. Essentially, that’s exactly what I was doing. Minus the ring and the orcs and the war of Middle Earth.

The Tongariro Crossing, the most popular of New Zealand’s Great Walks, is a 7-9 hour, 19.4 km walk through the barren landscape of a volcanic field. The walk also has two additional optional side tracks, one to the top of Mt Tongariro (elevation: 6490 feet) and Mt Ngauruhoe (elevation: 7519 feet). Because of my obsession with Lord of the Rings, I decided to embark on the journey up the latter of the two, which was Mt Doom in the films. 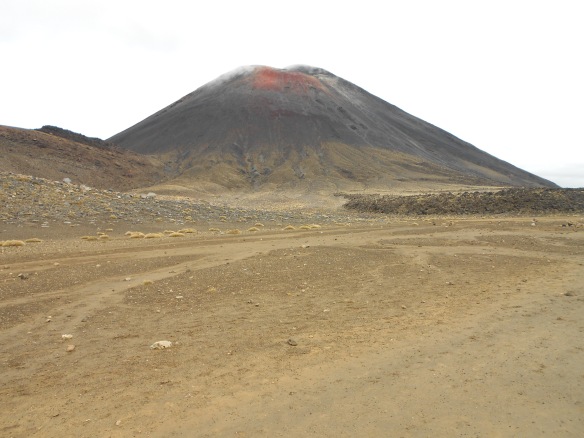 The Crossing starts out with an easy and mostly flat walk up to the Devil’s Staircase, the name being more ominous than the actual climb up the stairs. After tackling those obstacles, I felt unstoppable and motivated for my hike up to the top of the volcano. Last erupting in 1977, Mt Ngauruhoe (pronounced nah – ruh – hoe – ee) is considered an active volcano, although its activity recently is pretty nonexistent. Signs of warning along the Crossing were unsuccessful in detering me from attempting the task to tackle Mt Doom.

Getting to the bottom of the summit, I looked up and saw my final destination, thinking that it couldn’t be all that bad. The sulphuric gases must have had some effect on my common sense, because I had totally disregarded all warning signs about the physicality of climbing Mt Ngauruhoe. Being the only solo traveller on the shuttle bus to the Crossing that morning, I was also alone in raising my hand when the driver asked who was going to attempt any of the side tracks. Silly people, I thought about the others on the bus. Doubtless they were thinking the same about me.

The first quarter of the way up was filled with straw-like plants, and I told myself I would wait until the last sign of life before I stopped for a water break. Huffing and puffing, I finally reached this point and guzzled water like it was life or death. I then looked up and it finally hit me what the heck I was getting myself into. I wasn’t ready to give up. If those hobbits could do it, so could I. The volcano is sloped at a 45 degree angle, and the best way to get up is to find a ridge of rocky ground to anchor yourself and climb up. The ashy and loose rock on the rest of the volcano proved itself very tiresome, as it swallowed my feet everytime I took a step. I foolishly stepped on a loose rock, sending a mini avalanche to my grounded foot below. The largest of the rocks to fall decided my ankle would be a good spot to land. Bandaging myself up with a donated band-aid and a scarf tied around my ankle, I felt like a true outdoors warrior and continued on through my life-threatening injury more determined than ever.

After reaching the cloudline, I allowed myself another break. Holy shit, I climbed into the clouds. There was only a little bit of the way left to go, and I had only a little bit of energy left to go before I collapsed and died, so I decided to take the risk and make my way to the top. One of the most rewarding experiences and physical accomplishments I have ever had in my life. The view was absolutely incredible. As the clouds passed by, I was immediately engulfed in a fog with no sense of direction.

Mt Ruapehu peeking through the clouds to say hello

Climbing down the volcano, although one may think it to be a lot easier, was a whole new task and danger in itself. Secretly wanting to trip and fall and go tumbling down the volcano to make my life that much easier, I knew it wasn’t the most realistic way to get back to the bottom. The trip down was terrible, as I knew that once I descended, I had the daunting task of 13 more km to the end of the trail, something I wasn’t sure my burning thighs and calves would be able to handle. However, I did make it to the bottom and proceeded on the Crossing to see the rest of the sights and catch my bus back to my hostel. 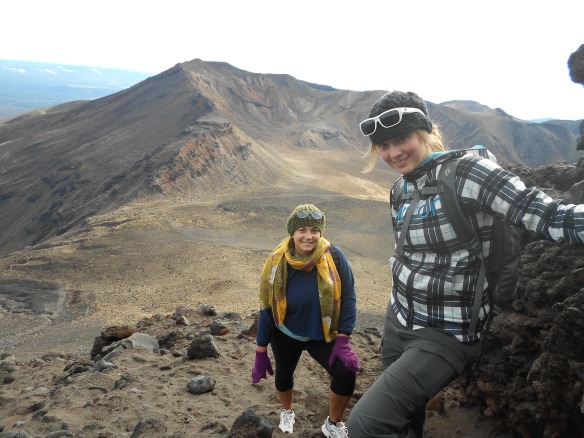 The views were amazing, and I got to see the natural beauty of the Red Crater and the Emerald Lakes. The seemingly endless trail finally led me to the car park where I awaited my shuttle back to the hostel, where I planned to collapse and not move until I had to. All in all, a totally amazing experience and not one I plan to repeat any time soon. Climbing Mt Ngauruhoe was undoubtedly the hardest endeavor I have ever forced my muscles to accomplish.

1 thought on “now I know how Frodo feels…”