The main objective of my visit to Christchurch was to use my Lord of the Rings tour voucher (courtesy of GrabOne) and make my wildest dreams of marrying Aragorn come true. The tour consisted of myself, a hippie couple from Washington and their 9-year-old son, and 3 sets of very elderly q-tip looking couples. I felt right at home. We drove for a few hours into the center of the South Island to reach our destination of Mount Somers, aka Edoras, capital city of Rohan.

Unfortunately, New Zealand made Peter Jackson and the LOTR crew deconstruct everything from the films and leave the land virtually untouched once filming commenced. Although all I had to go on was memory, it wasn’t hard to imagine the scenes here. I could easily see why this spot was chosen.

It was a short hike to the top, the most perilous of our obstacles consisting of dodging orc poo.

The golden, straw-like grass blowing in the wind tunnel valley was a striking contrast to the green I have grown so accustomed to surrounding me in this country. The backdrop was filled with blue-green braided rivers weaving their way through the land between brown mountain peaks which relentlessly poked through the soft pillows of clouds; I immediately felt J.R.R. Tolkien’s words and agreed with Jackson that this is one of the locations that embodied Middle Earth and the land of the golden-haired Rohirrim. 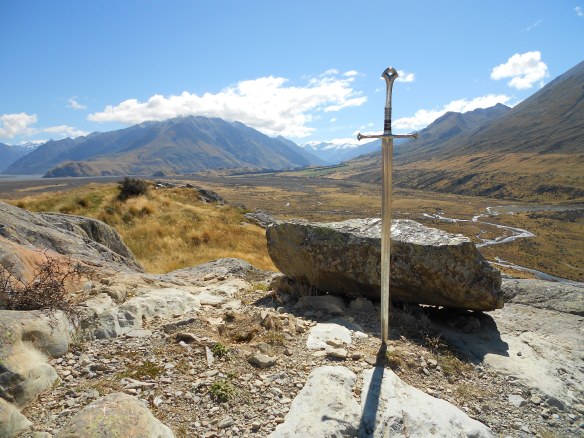 The highlight of my trip? Holding Aragorn’s sword. I am utterly infatuated with him. The only thing missing from this tour was Aragorn sipping champagne with me at lunch.