So it just wouldn’t be right for me to have this blog about life in New Zealand and not make a comment about the All Blacks winning the Rugby World Cup this year. Although New Zealand’s pride and joy dressed in black have been favored to win it almost every year, they haven’t been able to lay claims to the coveted trophy since 1987. So a championship was way overdue. New Zealand lives and breathes for its rugby as I have quickly learned. It really is a cool thing. Before every match, the guys do the haka, which is a Pacific Islander war dance. It’s really awesome and totally done purely for the intimidation factor and entertainment value. Here is a video of them before the final against France: . Anyway, after New Zealand won it in a match that literally came down to a nailbiter in the last seconds, the city of Auckland went off. Mobs of people everywhere. The following Monday, they had the parade. Even though I got into town very late, I was lucky enough to find a secret spot on the rooftop of a Chinese restaurant to enjoy a glass of wine and watch the parade. 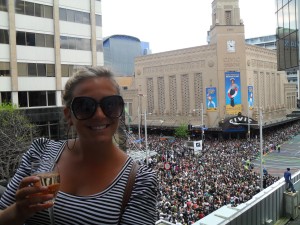 It was probably the smallest parade I have ever witnessed, but it seemed as though the entire population of this teeny country was in attendance. It’s just too funny how much they love their rugby. Go All Blacks! 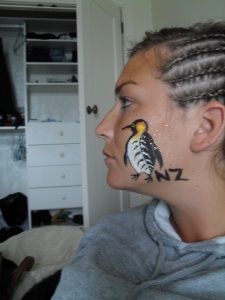 my face paint for the day of the final. courtesy of Kelly Tarlton's aquarium